Edit
watch 02:56
Raise a Floppa - The Loop
Do you like this video?
Play Sound

Due to the large scope of Frackin' Universe, there are more than a few mods that can suffer compatibility issues that could cause things like bricking characters, corrupting the universe, and even crashing the game.

Mods that can have compatibility issues with Frackin' Universe's normal functioning can be classified into five groups: The Destructive, who WILL PERMANENTLY break the the save/mod/game to an unplayable state, even if uninstalled. The Dangerous, who WILL break the mod if installed at the same time. The Problematic, which will cause serious issues when both mods are installed at the same time. The Cautionary, who can cause some problems, and the Safe, who could cause a glitch or two.

TO ADD A INCOMPATIBLE MOD TO THIS LIST, EDIT THIS PAGE, PUT THE LINK OF THE MOD IN IT'S RESPECTIVE SEVERITY GROUP, AND PUT THE REASON WHY

IF YOU DO NOT KNOW WHY THE MOD IS INCOMPATIBLE, PUT IT IN THE Needs Verification GROUP

Needs Verification: Someone said that the mod is incompatible, but needs checking on why[]

IF YOU FIND A REASON WHY A MOD IS INCOMPATIBLE IN THIS LIST, REMOVE IT FROM HERE AND PUT IT IN IT'S RESPECTIVE GROUP

Informative: Doesn't cause a problem if installed, but deserves a mention due to exploits, glitches, etc[]

The Naked Gun and its "But It's Good" Upgrade[]

When it hits a humanoid NPC, it will force them to drop all of their clothing/armor. Can be used to obtain otherwise unobtainable armors not intended for player use. Very deadly against Precursors, as they become very vulnerable without their advanced armor. Its upgraded version can also disarm enemies, with deadly results.

Repeatedly uncrafting Irradium (Ore, Bar, or Liquid) allows for infinite duplication. Can be used for a number of other exploits as well (Ultronium and Arc Smelter exploiting for example.)Use it for what it's meant for and you should be fine. There are other and better ways to make lots of money/pixels in FU anyway.

Safe/Redundant: Already integrated or something very similar exists in FU and/or Probably fine, but may have a glitch or two:[]

All FU shields are already aimable.

Craftable Seeds AND it's FU Addon[]

Seeds can be crafted via the Greenhouse

Originally integrated into the main mod, and eventually replaced by a version used only by FU. There's a compatibility patch that restores the original mod's button so that mods that use the normal version aren't affected, including Elithian Races. It's here, by the way.

FU does a similar thing, but both mods are compatible.

EC's Gas Planets do not work with FU's pressure protection, it has its own version which only works on the planets added by that mod, and not FU's. Additionally, elements from EC cannot be used in FU crafting recipes and visas versa. There is a patch, but it only allows EC planets to appear on FU stars and vice versa.

The Enhanced Storage store doesn't appear in the Outpost until the Erchius Mining Facility quest is completed, making "Visit the Outpost" unable to be completed until the former quest is finished.

Effects are disabled when using any FU Feeding Augment so it turns back off the hunger in Casual Mode.

Weird/inconsistent item names and hover-over cards. FU/Vanilla has the manufactor's name before the weapon name, MT does a random prefix instead

FU integrated iMisterX's older version; AbsoluteXero's version cleans up the material IDs used for included materials which may or may not cause issues when loading both FU and this version. From the author: "A future update is coming that will likely break compatibility with this mod on an individual basis; I will continue to work with the FU team to maintain the integrated assets and resolve any compatibility issues there. The mod will remain as a standalone for vanilla-based gameplay for those who don't use/are hesitant to install FU."

FU crew will spawn without clothing.

Integrated into the main mod as the X'i.

FU integrated an earlier version of the mod to restore the procedural monsters' special attacks. However, later versions of this mod have features that FU hasn't restored, like the old procedural minibosses, or the noises they used to make.

When noclipping, sitting or laying down will force your player to the bottom of the map, if crew members are following when this happens this might cause the crew members being cloned.

This mod has been integrated into FU. The game will still run with the old mod, but there will be some conflict issues.

Fenerox has been integrated into FU.The game will still run with other Fenerox mods, but there will be some conflict issues and problems with NPCs.

Caution: May be a problem:[]

ANY Race Mod That's forced to load after FU[]

FU added a new SAIL interface in version 5.6.239. The new Interface cannot be seen, and BYOS will not be available by race mods that load after Frackin' Universe, like the Avali Mod. The FU S.A.I.L. Modded Race Support and FU BYOS Modded Race Patch addons was created to solve this issue.

Redundant, FU has an identical feature.

FU and D+ edits the same table. Since FU and D+ try to add the same things, they will conflict and cause some errors unless a patch is installed

Frackin' Races has effectively replaced it, and it used to cause invincibility glitches.

Interferes with FU's techs and makes everything work weird and sometimes not work at all.

Messes up the Custom Collections UI screen so that you can't see FU collections or other collections that use the mod.

Outdated. Breaks Trianglium and possibly other things too.

Redundant, FU has an identical feature.

Incompatible with some FU weapons.

Moon Overhaul   Does not play nice with FU moon biomes.

Breaks FU aircraft. Png display. Not sure why.

Problematic: Do not use, WILL cause issues with FU:[]

Breaks melee weapons, and prevents the use of them.

Danger: Absolutely -do not- use, WILL be broken (and/or break key features) with FU, may crash your client:[]

FU needs the vanilla version of the Nav UI to function.

Replaces all S.A.I.Ls, which will cause serious issues with FU's integrated mod races.

Absolutely breaks XS Mechs, and by extension, FU's Mechs. It's improperly made and overwrites any major mech changes to config files. Do not use. It WILL break mechs in FU.

It doesn't use the patching system, so it conflicts with FU. It causes the treasure pools of FU to fail to patch, causing an error.

Completly breaks Coffee machine, will stop you from progressing.

Sayter updated Frackin' Races to use mostly .json rather than .lua. This mod hasn't been updated. Making a push request directly to Frackin' Races is recommended.

Fully integrated into the main FU mod. Game will not function if both are loaded.

Cosmic Crucibles do not drop when removed, making the mod useless

No. Not compatible. See Starbound++

Lyetzi's Gunners and it's successor Feast of Fire and Smoke[]

Changes ALL hover-over tooltips for all objects. It also modifies the player's energy cap (Caps energy at 100) and removes energy regen when one of the mod's weapons is equipped. Anything that uses energy while having any of the mod's weapons equipped will work like normal, but energy is shared between the weapon and other energy-using things, so the game thinks you're "shooting" even though you're doing something else.

Built into FU in a different style.

Integrated into FU, with improved code.

Conflicts with XS Mechs, and FU Mechs by extension.

To summarize: extremely outdated and nonfunctional.

"This mod is currently broken and only borderline functional, as of Starbound 1.3. I'm told by Steam users that 1.3 displays systems in a way that some planets cannot be visited. I'm not fixing this, since I'm not even playing Starbound these days. However, it probably wouldn't be hard to fix or at least make less broken, since it is such a simple mod. Anyone that wants to is welcome to take a crack at fixing it." -simulatoralive, the author.

FU already does what this mod tried to do. Outdated.

Breaks vanilla treasure pools, which can cause unwanted planetary ejections and universe generation issues. There's a Loot Fix that fixes the bugs, however.

Both mods modify cockpit.lua, which will break the ship if both are installed.

Incompatible recipes as it has not been updated in a while.

Direct conflicts, and is outdated. FU does most of what it does anyhow.

Duplicate tileID since the mod author didn't do their tileID homework.

It's author states that it can't be used with "other mods that adds other monsters", including FU - highly doubted though. The mod has been incorporated into the Pandora's Box mod, which is confirmed to be compatible with FU.

FU also restores Plutonium as a fuel, will result in a conflict.

"It patches the fuel levels higher for the earlier tiers but hasn't been built for compatibility with this mod."

Versions before 1.22 caused planet generation issues. The biggest ones were:[]

1.22 fixed the planet issues, restoring the dark planets and removing Sulphuric Seas, and the other problems were fixed as well. There's now a workaround mod so that only a Garden planet is needed to start the game: bk3k's Faster Start

Older versions used to break the Starmap. The author says it DOES work with FU, but this hasn't been tested yet.

Breaks the Kluex Staff's secondary attack, making the game freeze for a few seconds and have ultimately nothing happen other than that. There's a 1.3 version that fixes the bug, here. Fused longswords with the nuclear, cosmic, or shadow element will crash the game when attempting to damage another creature. There may be other crash-inducing errors as well.

Treasure pool error. Also has identical projectile names to some in FU (corrosiveparticle,regularexplosionnospark,huntingbullet,stickyplasma).

Implemented in FU, will cause a crash to desktop if both are installed

Destructive: Absolutely -do not- use. CAN and/or WILL cause PERMANENT DAMAGE to your save and/or your client:[]

Breaks Ocean Worlds and Swimming itself. (You swim slower, and its hard to jump out of it)

This is what happens: 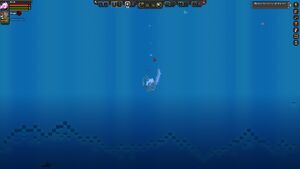 If you swim below the broken blocks the "sky will fall" and you sink for quite a long time - you hit the bottom and it "looks normal" like an ocean world should. If you try to swim back up, you can be sitting there for no less than 5-10 minutes trying to get to the surface. You never get high enough to beam out. 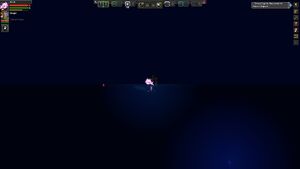 And this is what awaits you when you finally make it to the surface. There is no way to escape other than having a teleporter or dying and forsaking your stuff (on survival). After removing the mod, new Ocean Worlds were fine, but this previously broken one was still ... well.. broken.

Community content is available under CC-BY-SA unless otherwise noted.
Advertisement